Its no secret that Adobe has been going through a turbulent patch the recent months while they have been implementing their new adaptive strategy to an unruly future.

Its included layoffs and new hirings, internal repositioning and new layouts of their many divisions within services and products and they have taken a deep look at the business in terms products and offerings in the process of optimizing their market profile…

Its been painful, not only to see beloved team members leave Adobe but also to see that this major company refurbishing has not really been successfully communicated to both community, but also to users of the software and companies using services based on Adobe partners… even investors has been confused by the lack of diligence in the communication, however, its increasingly behind us as the new changes are settling in and the changes to the teams is stabilizing…

One of the massively controversial changes was the dealing with the future vision for Flex and the Flash Platform… I will not go into details with what has transpired over the past months, its well documented on every blog and site relevant to the community and product ecosystem and its not with a great pleasure I’m looking back on the past months… so let’s leave it behind and instead focus on the most recent statement from Adobe on their vision for Flex…

Now, there is not a lot new statements under the sun, however in contrast to the scrambling messages and divergent directions we have been seeing until now, its nice to see that Adobe has taken a deep breath and made a firm statement which would be difficult to misinterpret either positively or negatively…

If you are in a hurry and not interested in reading the entire writeup, I’m sharing with you the conclusion in a nutshell which confirms some of the more positive statements we have seen over the past months…

Adobe believes that Flex is the best solution for enterprise and data-centric application development today and is moving Flex into a community-driven open source project to ensure the continued development and success of Flex for years to come. We are currently in the process of contributing the core Flex SDK, automation libraries, AIR SDK binaries, and documentation to the Apache Flex Project. We will also be contributing Falcon, Falcon JS, Mustella, and BlazeDS.

In addition to these contributions, Adobe is providing a team of full-time Flex SDK engineers who will contribute to and support the Apache Flex Project. These Adobe engineers will work directly with the highly skilled Flex developer community to maintain, support, and evolve the Flex SDK. We remain committed to enabling the success of all existing and new Flex projects.

Thank you Adobe, for setting the record straight and for sharing with us your intentions and vision for Flex… its a privilege to be on the team…

Upon a week of drama across the world of Flex, the past week proved to be business as usual… and thank heavens for that.

In case you have missed it, the Flex team at Adobe has amended their original statement regarding the future of Flex in the context of Adobe.

We are preparing two proposals for incubating Flex SDK and BlazeDS at the Apache Software Foundation.
In addition to contributing the core Flex SDK (including automation and advanced data visualization components), Adobe also plans to donate the following:

Adobe will also have a team of Flex SDK engineers contributing to those new Apache projects as their full-time responsibility. Adobe has in-development work already started, including additional Spark-based components.

Eventually, its a much more positive and inspirational variant of the post after the update compared to the original one, so thanks to Andrew and Deepa for taking the time to make the effort to apply the amendment.

In retrospect, I found the entire experience of having the bag shaken in which we have placed our faith to be motivational and a reminder to update my skillset. This last point is something we can all take away from this experience.

Upon talking with dozens of Flex developers over the past weeks, it became clear that some of us had forgotten to stay updated and expand our toolset, and regardless of what happens to Flex, this is an important reminder. A professional is only as good as his tools allow him to be and the quality of the output depends on both the skill of the professional as well as their ability to choose the right tool for the job.

We should use Flex when it makes sense and remember to stay tuned to what is going on in other areas or our industry for the moment when Flex may not be the optimal tool for the job.

Another reminder I have taken away from this experience is my old commitment to continuously contribute to at least one Open Source project at any given time… obviously I will be contributing to Flex once it hits the repositories… why don’t you join me ?

Project Tamarind, once so promising and bespoken project… was co-owned by Adobe Systems and Mozilla Foundation, and has been discontinued for more than 3 years now… 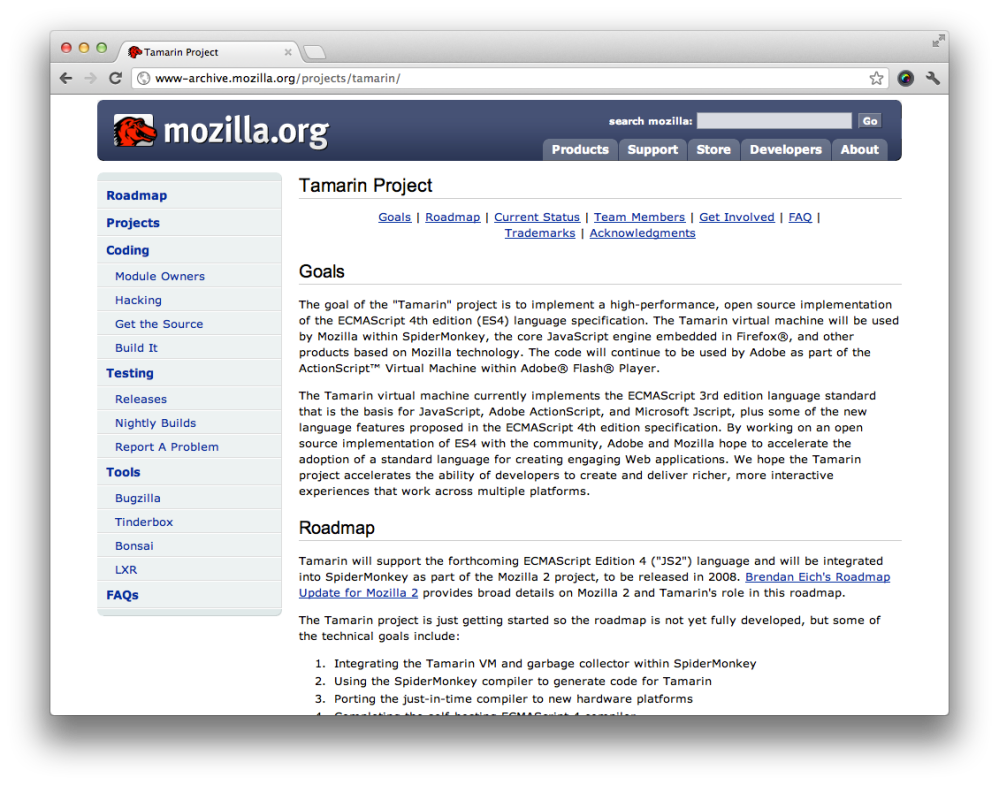 However, the sad state of this cool OpenSource project is that it hasn’t been touched since March 2008…

The members from Adobe are mostly names I have never heard of so I sincerely wonder what have become of them (perhaps they are still engineering in the dungeons of San Jose), anyways check the names out for yourself…

If anyone knows the obituary belonging to Project Tamarind, please do share… it seems to have been a massive Adobe effort that apparently ended up in a fruitless archive of The Mozilla Foundation.

Anyways, you can check out the archived project home page here…
http://www-archive.mozilla.org/projects/tamarin/

In the middle of 2008 I first time wrote about what I then thought was a cool but remotely stupefying OpenSource project… Gnash !

Gnash is the GNU SWF movie player, which can be run standalone on the desktop or an embedded device, as well as as a plugin for several browsers.

Gnash is capable of reading up to SWF v9 files and opcodes, but primarily supports SWF v7, with better SWF v8 and v9 support under heavy development. Since the 0.8.2 release, Gnash includes initial parser support for SWF v8 and v9. Not all ActionScript 2 classes are implemented yet, but all of the most heavily used ones are. Many ActionScript 2 classes are partially implemented; there is support for all of the commonly used methods of each class.

Obviously Gnash is also very far from providing a serious alternative as AVM machine tor widespread use, its basic use case now would be embedded on a chip, however the advent of readily available Android kind of defeats this purpose now, doesn’t it ?